Alex Gutentag: The War on Reality

Alex Gutentag has written a better and more comprehensive article on Covid than any of my posts. Excellent. Snippet: 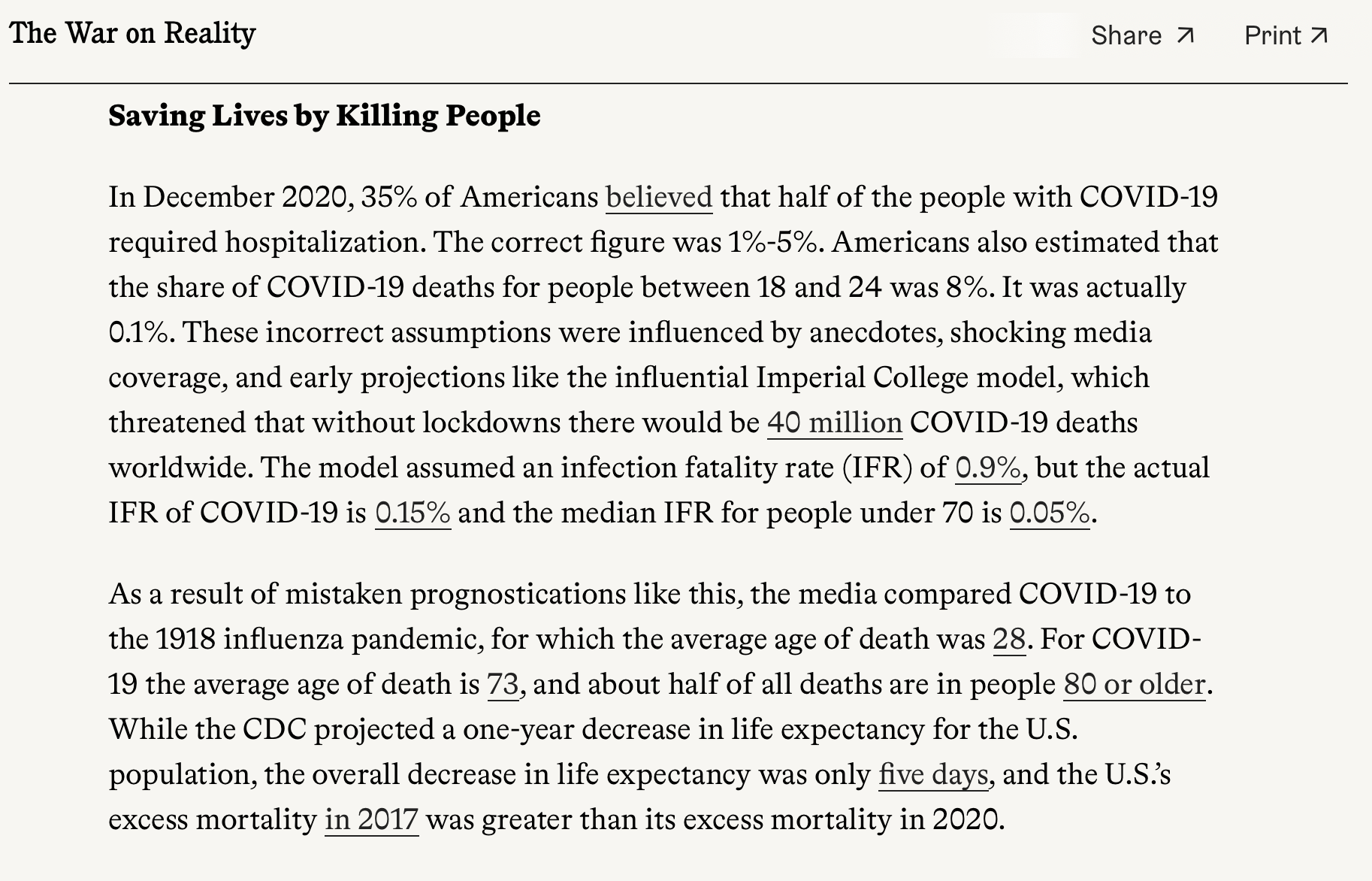 Joe Data said…
Some of this article I agree with, but a lot of it is misleading.

Gutentag states "These incorrect assumptions were influenced by anecdotes, shocking media coverage, and early projections like the influential Imperial College model, which threatened that without lockdowns there would be 40 million COVID-19 deaths worldwide. The model assumed an infection fatality rate (IFR) of 0.9%, but the actual IFR of COVID-19 is 0.15% and the median IFR for people under 70 is 0.05%."

Most other estimates of IFR are higher than those given by Ioannidis. The ones given on the CDC's planning scenarios page, last updated in March 2021, give an IFR of 1.2% when weighted by the age distribution in the U.S. So the CDC's current best estimate is higher than the 0.9% number she criticizes.

So, I agree that using the death rates in 2020 to estimate changes in life expectancy are misleading (even though it's the standard method), but estimating five days is also wrong. That assumes that after 2020, coronavirus just disappears and has no impact ever again. We are still experiencing echoes of the 1918 flu epidemc a century later, with hundreds of thousands of deaths worldwide every year.

Gutentag's citing of the study about "excess mortality" in 2017 is especially egregious. That study was comparing U.S. mortality to that in European coutries. That difference did not go away by 2020. The excess mortality we talk about is comparing 2020 deaths to recent years. There were 2.81 million deaths in the United States in 2017, and 3.39 million in 2020. That's an increase of 580,000 and only about 80,000 of that can be attributing to population growth and the aging of the population. The extra 500,000 deaths in the U.S. is what we refer to as excess deaths. If you want to compare that to a European country in 2017, that would be 900,000 excess deaths.

The fact that American longevity has fallen behind other developed countries should be a scandal, of course. I'm not implying that everything is fine with American health care.

denis bider said…
Joe, please don't continue to spread the "X% of the population have died of Covid" narrative. This did not happen.

People died for the following reasons:

- "Of Covid", though really of something else, but they tested positive for Covid.

- "Of Covid", but really of low levels of Vitamin D. My understanding is that extremely few people were hospitalized due to Covid, let alone died, that had Vitamin D levels over 40 ng/ul.

- "Of Covid", but really due to administrative prohibition of known cures including HCQ and ivermectin, and due to malpractices such as aggressive intubation which led to almost guaranteed death.

- From other diseases for which doctors delayed diagnostics and treatment because of the "scary pandemic" that was supposed to be going on.

I'm not aware of any nonsense regarding PCR tests. As far as I know, all of her statements regarding the use and abuse of PCR tests are correct.
05 July, 2021 01:20

denis bider said…
Here's Ivory Hecker, who had to step away from Fox News in order to be able to fully and properly cover the story of a Houston hospital that's having a lot of success curing Covid patients with treatments including ivermectin:

You do not hear this on TV because they want you to take the vax.

Despite this extremely obvious gaslighting, where they are maximizing fear of Covid and minimizing the harm of vaccines, you are still following their propaganda as if there's some way that their narrative could be legit.

Joe. There's no reason this can be legit. It's not legit. By perpetuating the propaganda, you are supporting murderers.
05 July, 2021 01:30 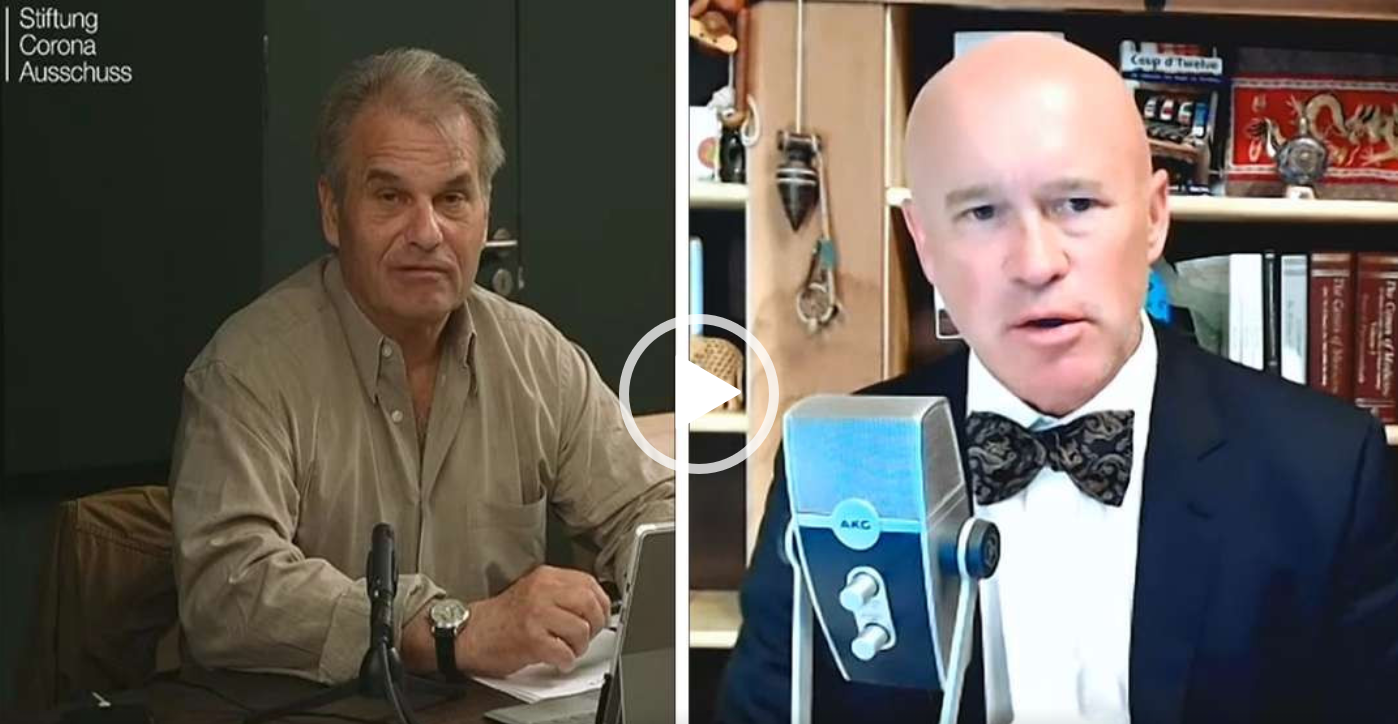