Striking passage on Buddhism in The Early Sessions: Book 4 of the Seth Material. Session 177, August 11, 1965:

"It is natural then that such a study will involve us in many allied matters. I may say that Buddhism does indeed come closer in essence to reality than other religions. However, the Buddhists either have not gone far enough, or have gone too far, according to your viewpoint.

They have the knowledge to a very large degree, but they have fallen short. It is one thing to realize that all physical matter is camouflage, and they know this. But this camouflage can be most disastrous if it is not manipulated correctly. You are in no position to ignore it. You are in a position to understand it and to use it.

It is all very well for monks to utilize astral projection. It is all very well for them to skitter through space as if they were on pogo sticks; their knowledge is fundamental and good. The fact remains that millions of human beings who follow and practice Buddhism are told, as many religions tell their followers, “Better worlds are to come, so ignore this agony, and this hunger, and this pain, and the murder in the streets. Be in ecstasy while your belly bloats.” This is not human, and it is far less than godly.

There is a unity and there is a joy and there is an exaltation in all aspects of life and consciousness. It is not to any religion’s benefit that people starve. There is nothing wrong with using spiritual knowledge in practical manners.

Fulfillment, value fulfillment, implies fulfillment of all abilities and all potentials, including quite physical potentials. The pyramid gestalts of which I have spoken have experiences far beyond those of any human being. Yet they are concerned with the least, with the existence of the least among you.

The fullest potentialities cannot be developed unless the physical aspects are also developed. Your job is to manipulate as well as you can within the physical universe, and to develop within it religious leaders of any denomination. Any leaders who restrict development along one level for the sake of development along other levels, betray their followers." 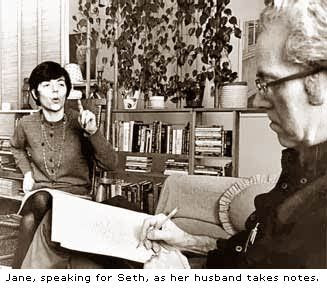 religion seth what is man