This is part of a series of posts where I try to summarize the Seth Material.

Seth is the chosen name of a personality channeled by American writer and poet Jane Roberts over a period of 21 years, starting in late 1963 and until her death in 1984. Most sessions were dictated to her husband, Robert Butts, but many were held in front of a small audience of interested students. A small proportion of the sessions were recorded on tape, and an even smaller proportion were recorded and remain available on video.

The bulk of the material was written down by Robert on pen and paper, then later typed. The material spans over 20 published books and can be argued to represent the life work of Jane and Robert, in addition to their other published work. Both the published and unpublished material is now stored in the Yale University Library Archival Collection. The books are available in physical as well as electronic forms. I read them on my Kindle.

The Seth material is hard to get into because it requires such an enormous suspension of disbelief. Whatever assumptions you have, religious or scientific, about the nature of existence – Seth will tell you they almost couldn't be more false. The exact opposite is true, and then Seth goes into 20 books (give or take) to try to explain just what exactly is true. Whether or not Seth is right is up to us to verify. We can do this in our personal lives, and it opens new avenues for scientific investigation. Such investigation must use different techniques from science as we know it, and Seth explains what some of those techniques could be.

Seth makes the point forcefully, and numerous times, that he communicates through specific layers of Jane's subconscious, but is not contained in them. He has an independent existence as an energy personality essence which no longer incarnates on a physical plane, but had such existences in what we think of as the past. Our concept of reincarnation contains truth, but is oversimplified because we are not aware of fundamental concepts. In great length and detail, Seth explains those concepts. Once that is understood, Seth can explain that in a "previous" physical existence, what is now a separate Seth and Jane have a common origin as a single personality. They are now separate, because personalities split as they make decisions. However, Seth and Jane remain related. Seth is not more advanced, but he does communicate from a more advanced aspect of himself, to a less advanced aspect of Jane.

To a lesser extent, the personality of Jane's husband Robert is also related to both Seth and Jane. This creates a psychological circumstance that helps Seth "come through" via Jane.

As an "energy personality essence", Seth does not normally use a name. He chooses Seth in one of the early sessions, since names are practical for communication with humans. Seth was his name in one of his physical existences, and he appreciates the mythological undertones.

Seth is not male or female. As an energy personality essence, he has properties of both. Most, if not all personalities – such as you and I – experience physical lives as both. He presents himself as masculine because Jane has hangups about women not being taken seriously in our culture. If Seth presented as feminine, Jane would resist channeling him.

What is the benefit of reading Seth?

It answers questions about life, the universe and everything in a highly detailed and coherent manner, unmatched by any other source – whether it be scientific, religious, or from channeling or hypnosis.

If you comprehend and integrate these answers, then simply as a beginning, this can blow through any chronic despair caused by inadequate answers from science and religion. Furthermore, you can find greater harmony in your everyday life, within yourself and in the way you interact with reality. This can make the rest of your life much easier, and makes it more likely that you will achieve goals and positive experiences which you otherwise might not.

If many people comprehend and integrate these answers, it can make all of our lives much easier, and makes it more likely that we will all achieve goals and positive experiences which we otherwise might not.

Competing materials, and why to avoid them

There are various sources with their own narratives reminiscent of Seth, many of them more accessible. In my opinion, that is their sole advantage. Their disadvantage is that they're simplifications, or worse. These are my takes on a few:

The difficulty of answering this question is why I write this summary. I would honestly suggest that you read everything. But no one wants to "start" by reading 20 books. They contain a great amount of knowledge, but the way it is conveyed is interwoven and gradual.

Seth conveyed it this way on purpose. The leisurely ways of the material are likely essential to the reader's comfort and comprehension. By summarizing it, I'm worried I'm partially defeating this. But on the other hand, fewer and fewer people seem to read these days, and attention spans are limited to 280 characters. To introduce Seth to people, there needs to be a summary that is shorter.

There is an excellent Seth search engine, and there are some online communities, but they're mostly empty. Almost no one I know heard of Seth. A perspective such as Seth's is desperately missing from our daily experience, and I find the vacuum unsatisfactory. I'm hoping that with this summary, I can interest at least a few people.

I suggest there are two main approaches to the books:

I have a technical mind that likes to get to the point, and I prefer to not miss any details. I therefore enjoy how the content is laid out in The Early Sessions. However, I did read the previous books first, so I trust Jane's and Robert's integrity without their plentiful comments.

You may want to develop an impression about Jane and Robert as distinct from Seth. For this, you will need to read some of the original books. But then, I recommend The Early Sessions. 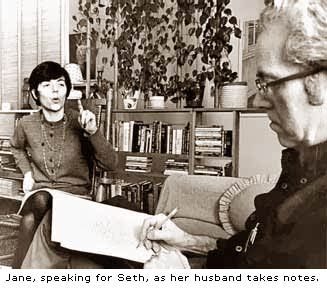 philosophy seth unexplained what is man