And now for gratuitous political views about the election 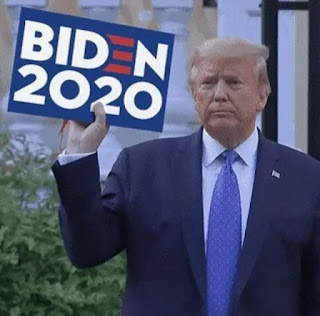 For the sake of the rest of the planet you should be voting Biden. [...]

I do hope you're not voting based on a single issue, it needs to be the whole picture.

Obviously, I now must dispense my wisdom. 😄

Regardless of who wins:

There's risk of regression on women's rights, but all things considered, Trump seems the better option. 🙂

Biden will give back to the media-military-industrial complex that which they crave, which is foreign invasions. Unless you live in Australia, this should concern you.

The millions of refugees in Europe, the resulting political tension in every EU country, the rise of the European far-right and the exit of Britain from the European Union all stem to US-caused violence in the Middle East. It all stems to the US media-military-industrial complex and the foreign policy that has been run on its behalf by both US parties.

Incidentally, most US voters don't care about that. But the rank and file in the US military does, because they pay for it in lost limbs and coffins. But there are flags on those coffins, so that part is nice.

DanSmith said…
"Four more years of entertainment with President as a goof."

Do you really not care about the fact that Trump's statements like where he calls various countries shitholes, or refers to COVID19 as "China virus" etc. are fanning racism? That the fact, that the entire country is watching him, is greatly increasing the chance of racially motivated crimes- including murders?

denis bider said…
DanSmith: Do you really not care about the fact that Trump's statements like where he calls various countries shitholes

We lived in those countries. Caribbean and Central America. 10 years.

The reason those countries are that way is because of the people who make them. You can call it mentality, culture, economics, genetics. Whatever you call it, it's the people.

Trump is 99% correct about immigration. If you import into the US poor people who risk their lives instead of immigrating legally; or pardon those who stay in the US illegally; then you are importing, into the US, the same dysfunction from which they run.

If you import enough, the US will become like those countries. Because the reason the US is prosperous is not the nature. It's the people. It's the mentality, culture, economics, genetics.

Immigrants do help the US, if you take the right ones. People who follow the process, who are useful for their talent and knowledge. Those contribute greatly. They are the reason the US is the single country in the world that has created the most wealth for the most people. When it imports people like that, the US benefits from brain drain. This harms the countries from which such people are coming.

This is not the case for people who jump the border though; or people who stay here illegally; or those who win the visa lottery.

The left no longer believes in IQ because it is racist. However, average IQ in Sub-Saharan Africa is around 70. Let's say it's instead 80. Average IQ in the US is 100 by definition.

When a person with IQ 90 moves from Nigeria to the US, this depresses the IQ in both countries.

Consider that for a few minutes.

Of course, the left no longer believes in objective measures. A California judge has recently banned the UC from using SAT and ACT tests in admissions – because objective tests are classist, sexist, ableist and racist.


DanSmith: or refers to COVID19 as "China virus"

It came from China. The Communist Party is claiming to their population that it came from the US. This is outrageous and demonstrably false.

We still call the 1918 flu the Spanish Flu. There was nothing Spanish about it. It's called Spanish is because the world was at war, but the Spaniards permitted newspapers to report on the flu. So it looked like it hit Spain first. It didn't.

The origins of that flu are uncertain – but China is on the short list for that, too.

There are fewer Asians infected with the woke virus than there are whites. This intellectual dysfunction of seeing racism in every nook and cranny is primarily white, supported by radical blacks. It's not even supported by most black people.

Asians are skeptical of this propaganda because they know they're not held back by racism. They don't have a victimhood mentality and they know it won't help blacks.

As opposed to most people, I can do basic math, and predict that such deaths will remain trivial.

The fanaticism here is the left's making. It's the idea of racism everywhere, the projection of victimhood onto blacks and guilt onto whites, and the hate engendered by this.

The left projects its fascism and its authoritarian tendencies on what it hates. It does not see that it has those properties.


DanSmith: How come you're so concerned about loss of innocent life in the Middle-east

What a way to show that the number of people affected doesn't matter to you, only their nationality. This is hundreds vs. hundreds of thousands.

DanSmith said…
You're missing my point, which is about the effect that a President's statements and behavior have on the wider population. It's not about the validity of those statements - yes, I'm entirely open to the fact that your points might be true. However, as a national leader, you have the responsibility to not state things that will incite violence against some of your own citizens. Again ties back into my point of leading by example.

It's hard to tell whether it's sheer stupidity or courage to openly and publicly state, while living in the midst of the US, that you don't value the lives of your fellow citizens more than those of some Middle-easterners (who probably don't feel the same back towards you).

DanSmith said…
There is a fundamental difference between the effect of statements made by someone who's watched by the entire world, and someone who's scribbling on some obscure blog.
10 October, 2020 07:38

denis bider said…
DanSmith: You're missing my point, which is about the effect that a President's statements and behavior have on the wider population.

This point seems nonsense. The President is elected by the population, so you're saying that the population has an effect on itself.

DanSmith: However, as a national leader, you have the responsibility to not state things that will incite violence against some of your own citizens.

Trump says lots of bullshit but the net damage has been negligible. It is blown out of all proportion by media that are part of an interest group that hates him.

Obama didn't say much bullshit, but him being an inspiring figure did not preventing him doing much damage abroad. He also failed at what he should have done at home, and betrayed the public. Instead of reinforcing principles, his response to the leaks by Snowden, Manning and Assange reinforced unaccountable federal authority and legitimized systematic corruption, as long as it respects hierarchy.

DanSmith: It's hard to tell whether it's sheer stupidity or courage to openly and publicly state, while living in the midst of the US, that you don't value the lives of your fellow citizens more than those of some Middle-easterners (who probably don't feel the same back towards you).

Does someone pay you to make these manipulative statements? Or do you somehow believe that communicating like this is constructive?

I have said, and will say again, that people create their own countries. Absent external meddling of more powerful nations – and the US does a lot of meddling – the problems of countries all over the world can be attributed to the people in them.

BUT THIS DOES NOT MEAN WE ARE ENTITLED TO KILL 100,000 OF THEIRS TO SAVE 100 OF OUR OWN. If you insinuate this, you are a racist of the worst kind, and this makes your proclaimed liberalism a disgusting hypocrisy.

Now please refrain from further comments because you have shown you are a despicable person, and you are no longer welcome on this blog.
10 October, 2020 18:11

denis bider said…
DanSmith, I felt a few days ago to tell you I appreciate your comments, even if we disagree. I probably should have acted on that when I felt it, instead of waiting for your next comment. Perhaps if I did, you wouldn't veer off into hostile and abusive replies – such as the one that I just deleted.

You must understand that only people with a deficit of self-respect will tolerate an anonymous person addressing them repeatedly with abusive language. You may learn this over time as other people in your life also tell you to bugger off. On my behalf, this exchange has ended and you will need to learn your further lessons about constructive communication elsewhere.
11 October, 2020 15:39