November 10, 2019
A week ago, I posted about a simple diff algorithm which works, produces tolerable results, but is ultimately a toy. I wanted an algorithm that produces excellent results while keeping consistent worst-case performance.

I didn't want to implement the Myers algorithm because:
I was inspired by this excellent visualization from Robert Elder's page about the Myers diff: 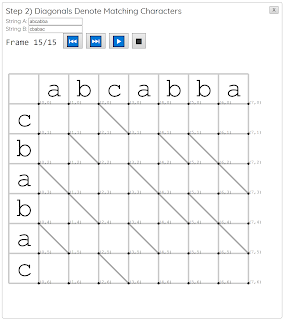 I built on the core idea from my simple diff, the unique unit map, to devise a sliding matrix algorithm:


The C++ implementation takes 0.2 seconds to compare two 8 MB inputs, each with 100,000 lines. The corresponding memory requirement is 40 MB. This performance is representative and cannot be substantially worsened by finding special, contrived inputs. Such contrived inputs would instead worsen the quality of the solution found.

I published the implementation under a MIT license as part of Atomic. The following are the most relevant files:


The implementation does need the rest of Atomic to build as-is, but anyone who wants to can adapt it.

Edit: As of November 17, 2019, this now implements the Myers algorithm, which is more effective, more efficient, and more straightforward. The new implementation has no need of the nifty HTML debug output, as well as most of the other toggles and switches. I continue to discuss the previous implementation below.


Example of the algorithm at work

Command line - using toy settings for demonstration:
This does the following:
Screenshot of HTML debug output - click to enlarge: 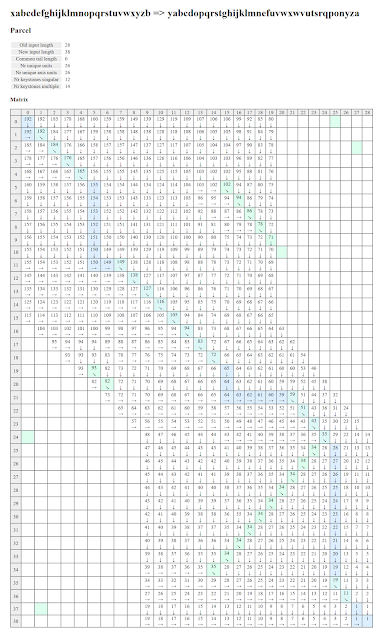 To see how and why the output deteriorates if the sizes of inputs and the number of changes are too large for the sliding matrix, set a smaller sliding matrix width, for example -smw 10. But keep the parcel splitter disabled using -pns - if it's enabled, it will cut the input in two parts before calculating two smaller matrices, again resulting in good output.

Having implemented all of this, I found I had developed an understanding of the problem such that I was no longer discouraged from implementing the Myers algorithm. So I implemented that, and it works great for all inputs. :)
cpp programming technology

Boris Kolar said…
Clever. The flaws of this algoritm is when you have two files with long differences at the beginning and the end, which will prevent finding potentially nice diff in the middle.

How about finding the longest common substring(s) (which is O(N*log(N)) with some clever tricks) and then recursively applying the algorithm to remaining segments?
14 November, 2019 03:07

It actually works surprisingly well in many such circumstances: if the long differences are additions or removals such that the same lines appear only in the source, or only in the destination, they are trivial to ignore (in the post: "Any units (lines) that appear only in one of the inputs are trivially excluded and are treated as attachments to axis units.").

The real problem arises if N lines are duplicated, or M lines are deduplicated (but not completely removed), such that |N-M| > (sliding matrix width) / 2. In that case the diff output is suboptimal because it doesn't find a common run that would require going outside the calculated part of the matrix.

> and then recursively applying the algorithm to remaining segments?

Avoiding recursion, or controlling it, is a big reason for designing this algorithm. :) Our previous algorithm was based on Myers and used recursion, but then it either had O(N^2) performance on certain common inputs, or it could overflow the stack on certain other inputs. Performance needs to be consistent and predictable.
14 November, 2019 22:24

denis bider said…
> How about finding the longest common substring

Oh, substring! Not subsequence. Yeah, I'm doing that. See below:

Also and more importantly, when groups of lines are transposed (e.g. moving a function from near the bottom to near the top), such that the cumulative length of transposed sequences exceeds (maximum width ) / 2.

Nevertheless, it's a waste to calculate the full matrix for a large input that contains a handful of small changes; especially if this is frequent and you have to do the calculation every time. For this reason I'm working on some additional tricks. One is to detect a long common substring on which the input can be split (I believe that's your suggestion). Another is to move the fixed-width spotlight in the matrix in a smarter way.
14 November, 2019 22:50

denis bider said…
With regard to longest common substring:

Wow, I found this great explanation of the Ukkonen algorithm to build a suffix tree. This looks like it would solve the longest common substring problem more generally than I'm doing right now, but it does seem to be complex.

Right now I'm finding the longest common substring with a simple trick: I already have the unique unit map, so I can just look for what I call "keystone units", i.e. lines that appear exactly once in both input and output. It's trivial to find common substrings that contain such lines. Unfortunately this doesn't generalize: if you simply duplicate every line in the old and new inputs, there are no longer any "keystone units" and the algorithm doesn't work. But that's not a typical scenario I expect.
14 November, 2019 23:28

Having implemented all of this, I found I had developed an understanding of the problem such that I was no longer discouraged from implementing the Myers algorithm. So I implemented that, and now it works for all inputs. :)
17 November, 2019 17:45