Sadism is an expression of service-to-self. Service-to-self is a spiritual and philosophical orientation whose fundamental trait is that only one's own subjective experience matters. The conscious experience of other persons and creatures is not perceived to be a thing. Instead, such other creatures are perceived to be phenomena, which are judged in good shape if they serve the individual's self; and are in need of control and coercion when they fail to serve properly.

Sadism, in particular, is the enjoyment of the practical application of the methods of control and coercion, whose purpose is to obliterate the individuality of the other-self. The ultimate goal is to force the other-self to accept that it is only an object in the mind of the sadist. The sadist believes he or she is all that exists. Their pleasure is in taming you so that you too accept that they are everything. The climax of this experience for them may involve destroying you physically; but by far more important is destroying you psychologically. You no longer exist as a person, and the pleasure is when you're forced to accept this.

Now, consider Eliezer Yudkowsky. He is a self-taught polymath and an AI enthusiast who has single-handedly founded a rationalist community through his blogging with Robin Hanson on Overcoming Bias, and later started a quite successful offshoot in Less Wrong. Eliezer is concerned with optimizing the world, ostensibly for the benefit of everyone. He is also, I was told, a sadist – which he has kinda confessed:

BDSM didn’t exist in dath ilan. I don’t really know why. Maybe everyone in dath ilan who realized that they wanted to be hurt, categorized themselves as having the stereotypically nonvirtuous quality of self-destructiveness, and kept quiet about it, or met only other people who thought the same thing. I’m very worried, in retrospect, that they all managed to cure themselves via standard self-modification techniques. It’s *very* obvious that if I’d realized in dath ilan that I was a sexual sadist, I would have treated this as an error and probably not told anyone before I fixed it. It would not have occurred to me that sexual masochists were a thing or that I could find a willing victim to be sadistic at, I would have thought I was being sick and selfish. Having been to Earth, this strikes me as a genuine failure of dath ilan culture, and even worse, I have to confess it’s the sort of thing that Earth’s Hollywood Vulcan stereotype might lead someone to expect [...]

He writes fiction where he praises an imaginary rationalist culture, and their superior approach to solving problems. Yet he builds into it a complaint that they have also "solved" sado-masochism. He appears to think of this as a loss. 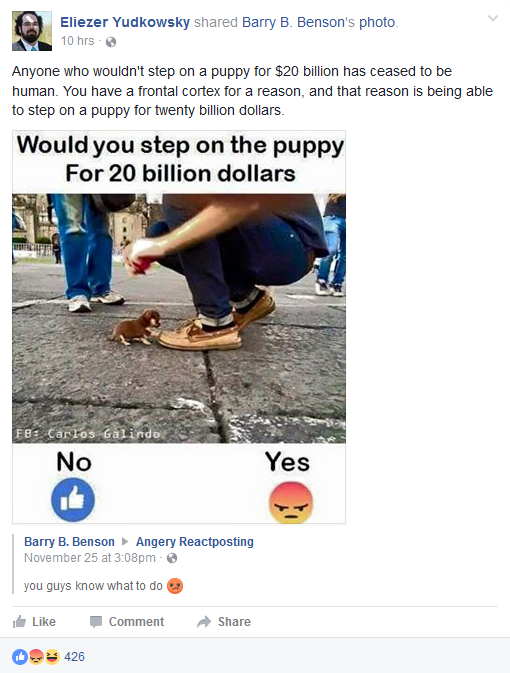 Eliezer may not realize it, but this only makes sense if you're already a sadist; if you're confused; or if you're trying to rationalize yourself into service-to-self, where you're the only consciousness that matters.

The fundamental problem with this is that $20 billion has no other use than to control what other people do with their time. In order to want $20 billion, you must have a desire to control.

Eliezer, of course, has this desire in spades, and so he thinks it's rational to assume that everyone else has it, too. But this is not the case. For most people, $20 billion is more of a curse. After they've catered to their whims – what does the average person know about using $20 billion responsibly? I wouldn't know how to use it.

If you ask most people if they want their mortgage paid off now, at no cost, I suspect everyone would say yes. The way we structure our economy makes almost everyone a slave. I can see how most people would step on a puppy in order to no longer be slaves. I can imagine plenty would do so, even as they beg the puppy's forgiveness.

But $20 billion is more than a personal liberation. Even one 10,000th of that – certainly one 1,000th – is sufficient. All of the rest is enabling control. If you already feel personally liberated enough, this whole situation is whether you're the kind of person who feels a compulsion to inflict their will on others.

Which Eliezer is. And he cultivates a following who are these types of people. And he encourages thought that justifies being this way, and rationalizes becoming this way even more so.

This is, fundamentally, the wrong type of person to be – if you want to live in a universe with other people. This is because, if you want control – this can ultimately only be had in a universe consisting of one person. As long as other people exist, they can do things to thwart your control. And you don't want the control just for kicks; you want it for reasons that seem existential. The ultimate end-game of this concept is a realm where one person dominates all others, to an extent that all other persons nearly cease to exist. And the way to this end-game is ever-increasing commitment to service-to-self: a direction of mind where your consciousness is the only thing that matters; and you come to perceive other people only in terms of their usefulness to you.

This includes people you love. It includes your partner and your children. At some point, it leads to the realization that loving people is in counter-position to your desire to control. Because love does not control.

The desire to control is rooted in fear. For Eliezer, this fear is existential. He has experienced a heart-rending death of his brother. So he seeks to eliminate death.

But the only way death can be eliminated is through control. And the only way a sufficient amount of control can be imposed is by de facto killing everyone's individuality. If one wishes to deny the ways we can put each other at risk, this extends to everything, including thought. Because thought can lead to words; and words can lead to actions; and actions can cause death. This can be negligent or intentional death of others; or suicide on purpose; or suicide through risky or unhealthy habits or drugs.

The result is a universe where death has been eliminated, but only because there is nothing left to die. There is only one individuality remaining. That of the controller.

There is another path, and it is at odds with control. It is to let go. Help other people if you can. Absolutely, if you can – research cures and improvements. But don't try to clutch. Love everyone to the extent that you can; accept things as they come and go. Grieve your loved ones when they leave; but also let them go. And then accept new ones.

Do not fear death. It is almost certainly not the end of things. But most of all: do not be too afraid to live.

Life is not about clutching things in a fist. You either open the palms of your hands, and accept what freely flows out and into; or you clutch what you're holding right now, and scare or squeeze most of it away.

If something fails to escape your grip, the squeezing for sure will kill it.

If you already believe you are free, there's nothing you can buy with $20 billion that's worth stepping on a puppy. If the things you want people to do are good things, they can already do them themselves. If they do not, there are reasons for this other than money, and words will go further than bribery. Billions can free you from perceived enslavement – but all you get beyond that is an exercise in the futility of control.

If your ideas to improve the world are so great, they will have an effect. It does not involve killing puppies. Unless we're talking clinical research – in which case, it might. But not just for no reason.
ethics morality philosophy reason what is man