Showing posts from October, 2015
Show all

October 25, 2015
Around this time of year, complaints pop up about the need to adjust clocks by an hour. I am usually one of the complainers, so I wondered: why do we still change clocks to DST and back, when apparently, most people hate it? If most of us prefer a single time throughout the year - what are the obstacles to making this happen? After some research, I suspect the answer is: We do in fact prefer more daylight during evenings in summer. Because of this, we might prefer permanent DST. However, we can only borrow the evening daylight from mornings during summer. In winter, there's no light to borrow, unless we want mornings to be black. In northern places, like Seattle, permanent DST would mean sunrise at 9 am at end of December and early January. Even as far south as Dallas, with permanent DST, sunrise in January would be at 8:30 am . It appears that permanent DST would be great for those of us who get up late (more daylight!); but it would make winter mornings dreary for people
Post a Comment
Read more 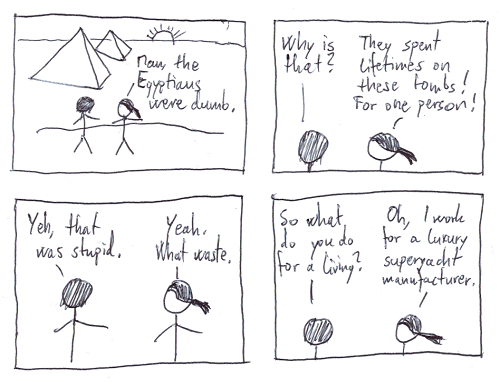 A commonly understood truth is that consumer spending is good for the economy. A common mis understanding is that this is true for all forms of consumer spending: even $500 million superyachts; private jets; and the building and maintenance of luxurious villas that most of the year, no one lives in. A superyacht is absolutely no better than an Egyptian tomb. It is to build a huge and expensive thing for one person (and their close friends), instead of spending the time and resources building something more widely useful. To think this is better than a pyramid is to fool ourselves with economic sophistry. Anyone who looks at this from a 1,000 year perspective will consider us foolish. To say that superyachts and private jets are "good for the economy" is equivalent to the Broken window fallacy. Superyachts, jets, and villas that no one lives in, are extremely expensive broken windows. Progressive consumption tax I do not suggest defining some arbitrary categories of p
1 comment
Read more

October 03, 2015
I came across the Referrer Policy proposal, which is already implemented in Chrome and Firefox, and allows sites to provide more privacy for their users by restricting referrer information sent to other websites when users follow links. For example, with default browser behavior, if you are browsing the following page: https://www.reddit.com/r/bigdicklovers/ ... then if you click any links on that page which take you to a third-party site, for example: https://www.employer.bigfirm/ ... your browser will kindly send to that site the full address of the "Big Dicks" page you came from. This has some unfortunate privacy implications, so finally, browsers (except Microsoft's, of course) are allowing sites to exert more control over what referrer information is sent with outgoing links. One of the nice new policies a site can choose is origin-when-cross-origin . Or is it? In 2014, the First Public Working Draft of the spec made a "mistake", and defined this
Post a Comment
Read more
More posts