BusyBeaver and the state of near-native code in browsers

June 26, 2015
Curious how cryptography performs in asm.js vs. Google Native Client? Check it out for yourself:
A description of my path to these examples follows.


I was impressed recently with what I read about Google Native Client, which is embedded in Chrome, and Firefox's asm.js and Emscripten. I was further impressed by how I can play Prince of Persia in my browser, and it works via DOSBox inside JavaScript, and it's actually perfectly playable, aside from key lag. :-)

I've recently been working on BusyBeaver, a new password hashing, key derivation, and proof of work function. Existing commonly used password hashing approaches suffer from extreme brute forcing susceptibility on hardware as widely available as an AMD GPU. BusyBeaver is my attempt to improve upon PBKDF2 and scrypt in its resistance to optimization via execution on a GPU, FPGA, or most anything other than the intended usage platform - a 64-bit, general purpose CPU.

It seems I've done a decent enough job with BusyBeaver, as far as resisting GPU optimization is concerned, so I had the idea to see if I can use Emscripten, or Google Native Client, to have it run in browsers. It would, after all, be useful to a website that wants to offload the CPU cost of rigorous password hashing to the person who is intended to benefit from it — the user.

Well, first of all, I was able to get BusyBeaver to compile with Emscripten, and it does run in Firefox, IE, and Chrome... in descending order of performance. It will become clear why I say this.

It takes a while for this to execute, but... BAM! 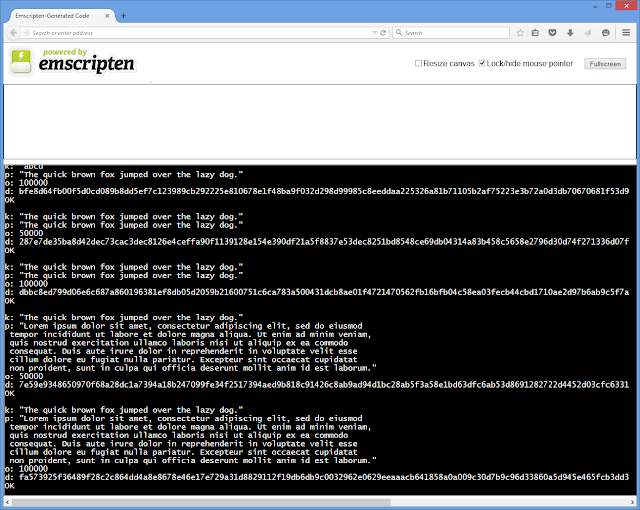 The test vectors run! And they are correct! Yay!

Note that this is an achievement in its own right. This is C++ code, compiled without modification into JavaScript, and it runs in a browser. That's pretty awesome.

But. There are buts.

I also adapted BusyBeaver for Google Native Client. Results?
In my opinion - asm.js has:
If you're going to have something as sophisticated as Emscripten, and a proposed standard like asm.js, why not just adopt a proper binary format?

Until then, we have statements like these, coming from Mozilla and Opera:
:-/

denis bider said…
Well, good thing they finally seem to be working on it.

Check out my most recent update to the article. I've implemented a version for Google Native Client. In Chrome, it executes in 10 ms, compared to Firefox's 500.

I'm not seeing a load time problem with the asm.js version of BusyBeaver. I'm seeing an execution time problem - 500 milliseconds per digest is fifty times slower than performance with Google Native Client.
27 June, 2015 07:10