Showing posts from June, 2014
Show all

The incompatible trinity of relationship features 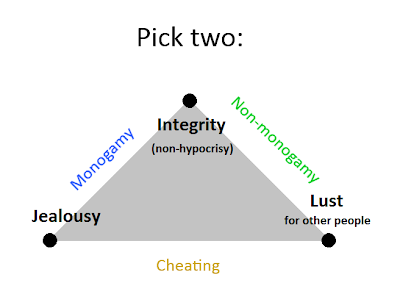 My theory of people is that most aren't naturally mono, or naturally poly, but naturally hypocritical. While many mono people genuinely feel no desire for other partners, many - perhaps most - suppress this desire because they think this is expected of them, and also because they couldn't handle their partner having such a desire. While many poly people genuinely feel no jealousy about the romantic and sexual actions of their partner(s), many - perhaps most - strive to overcome this jealousy because they recognize their own desire to be with other people, and wish to extend the same freedom to their partner(s).
Post a Comment
Read more

Breaking Bad is awesome after all

June 08, 2014
Spoiler alert: If you haven't seen Breaking Bad up to and including Episode 1 of Season 3, stop reading here. Okay, so in October I wrote a fairly scathing criticism of Breaking Bad . It was when Jana and I got stuck, and just couldn't keep watching when it looked like Mr. White was going to have another completely unnecessary episode of madness, and burn all that money he had made. Several months later, we finally mustered the willpower to keep watching, and we were blown away. Season 3 definitely exceeded our expectations. We are now at Season 4 and loving it. The main characters, White and Pinkman, remain hateable - but the script is much more fun than we expected it would be. That is all. :)
Post a Comment
Read more

June 03, 2014
I suggest for either of the following player abilities to be added to WoW. The reasoning is that this would be awesome and cool. Either of these would fit the kit of a Warlock, a Shadow Priest, or a Death Knight: Living Nightmare. This would be a non-spammable CC ability with a medium-to-long cooldown. Dying Nightmare. This would be either a passive ability that activates randomly when dealing a killing blow to a player; or an active ability with a cooldown, giving the targeted player a debuff, and activating if the player dies with the debuff. Dying Nightmare would be an "enhanced death" experience, rather than a CC. On activation, either ability would leave the targeted player's body behind, and would teleport their spirit into one of the following locations: A rocky cliff with a narrow tightrope to another cliff, where there is a portal. If the player makes it across the tightrope without falling, and enters the portal, the player is ported back to their body wit
2 comments
Read more
More posts