Showing posts from January, 2014
Show all

People's characters do cluster in groups 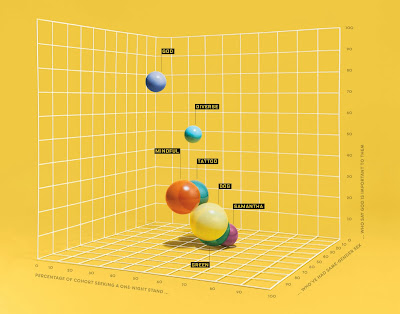 To me, the most interesting thing about this article is that people - or at least, the online dating profiles of the 25,000+ women that McKinlay datamined - do in fact cluster in a handful of groups, where individuals within each group have a surprising amount in common:

How a Math Genius Hacked OkCupid to Find True Love

That doesn't mean the individuals are interchangeable, of course, but the existence of structure in the results is interesting. Who would have thought that women across the US do in fact tend to fit neatly into one of seven personality types?
Post a Comment
Read more

January 20, 2014
I wrote this as a response to hecklers who were miffed when I assumed a male perspective when talking about software developers. There are those who think this is sexist, and alienates the women in the field.

I've honestly met... very few female software developers. They're like unicorns. I guess they must all be employed by larger companies wanting to meet diversity quotas.

Joanna Rutkowska comes to mind. Her work is impressive. Also, Tanja Lange. Oh, and Wang Xiaoyun. But these are all scientists/researchers, which is a related, but different field.

The number of women I see in software engineering is comparable to the number in physical construction work, or logging. Over the past several years that I've been looking, I haven't had a single woman apply as a software developer for work at our small company.

Why one would insist on being recognized as a 50% participant when one is actually a 5% participant, is beyond me. I welcome women in software, but they should mov…
Post a Comment
Read more

Police should be recording video while on duty

Police really should be recording video at all times while on duty. There are so many advantages:
People tend to provoke officers less.People tend to file fewer false complaints - there's no way to get away with lying.Encourages officers to act professionally and avoid abuses of authority.When an encounter resulted in harm, there is compelling evidence on whether the officers' behavior was justified.There really isn't a down side, except for the technical cost of recording, which is minimal.
Post a Comment
Read more

January 07, 2014
This is what I've been talking about:
Science teacher loses almost 40 pounds on ‘McDonald’s diet’

Ninety days of Mickey D’s for breakfast, lunch and dinner but with strict daily nutritional limitations of 2,000 calories and trying to stay close to the recommended dietary allowances for nutrients like carbohydrates, proteins, fat calories and cholesterol.

“So this isn’t something where you say, ‘Well he went to McDonald’s and he only had the salads,’” Cisna said. “No, I had the Big Macs, the Quarter Pounders with cheese, I had sundaes, I had ice cream cones.”

During the experiment, he also started walking 45 minutes a day.

He said the moral of this lesson isn’t to eat more at McDonald’s but to pay attention to your daily nutrition and what you eat.For the past 7 years, I've had the exact same experience. Watch your calorie intake, keep a balanced diet, and exercise.

January 05, 2014
I'm at a loss for words. We were accustomed to hearing about such crimes against humanity from the Taliban - but that this can happen in our day and age, in a developed first world country, is unfathomable.

Back in 2012, when Canada's Harper government announced that it would close down national archive sites around the country, they promised that anything that was discarded or sold would be digitized first. But only an insignificant fraction of the archives got scanned, and much of it was simply sent to landfill or burned.

Unsurprisingly, given the Canadian Conservatives' war on the environment, the worst-faring archives were those that related to climate research. The legendary environmental research resources of the St. Andrews Biological Station in St. Andrews, New Brunswick are gone. The Freshwater Institute library in Winnipeg and the Northwest Atlantic Fisheries Cen…
Post a Comment
Read more

Private roads and your cable service

January 01, 2014
Many friends of my friends are hardcore libertarians, and so I came across someone who argued:

If roads were built by the private sector they would be well maintained and safer and less costly.
I'm all in favor of free markets - under a framework of sensible law that makes an effort to neither favor anyone, nor limit unnecessarily.

But the economics of roads are such that I'm very doubtful that having them managed privately would be good for anyone but the private road owners.

If the cost to maintain the road efficiently is X, then the government is likely to be inefficient, and will spend K*X. This tends to be because the road maintenance contract doesn't go to the company that would do the best job for the price, but to the politically connected company that will intentionally build the roads shoddily, so they can keep repairing them and charging for it. I've heard anecdotes where the company with the road maintenance contract will intentionally wreck a well built roa…
Post a Comment
Read more
More posts