Showing posts from May, 2012
Show all

If you're ever in Vegas, looking for entertainment... 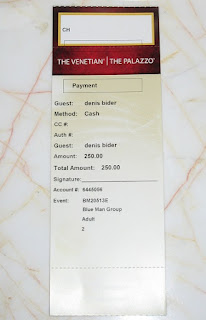 ... think at least twice before you see the Blue Man Group. I hereby submit some of the worst money I've ever spent on entertainment: First of all, this show is expensive. It's going to cost you $75 per person for an obstructed view . That's sort of in line with other shows in Vegas, perhaps a bit pricier. But that brings me to my second point: It's not comparable to other shows in Vegas. You're going to have a better time going to a movie theater. You don't even have to check what movie is playing. If you're in Vegas, just buy tickets to any movie playing at Rave Motion Pictures Town Square, and you're going to have a better time. Guaranteed. Unless the movie is Jack & Jill. And perhaps even then, maybe. If you don't feel compelled to see Blue Man Group: You could use the same money to see ten movies with your mate. You could have a more than delicious dinner for two at Sushi Samba. You could take your significant other to Spear
1 comment
Read more

Economic woes of the US middle and low classes

May 10, 2012
My previous post was about religion and its scary effects on a powerful democracy such as the US. However, I started the post by saying good things about the US economic system. This attracted some comments, pointing out the growing income inequality in the US, the unemployment and the lack of income growth for middle and low classes. I'm not decided on whether that trend is as grim as commonly assumed. For the time being, I think it's plausible to say that employee wages aren't growing, because employees have to compete with products and services provided by developing countries. That's harsh on US employees because they live in a first world country with first world costs, but they have to compete with third world workers who live on third world costs. From a global perspective, someone who earns a minimum wage of $7.50 per hour, or whatever it is, is still vastly overpaid compared to a Chinese guy earning a few dollars a day. The only competitive advantage of th
2 comments
Read more

Yes, we are afraid 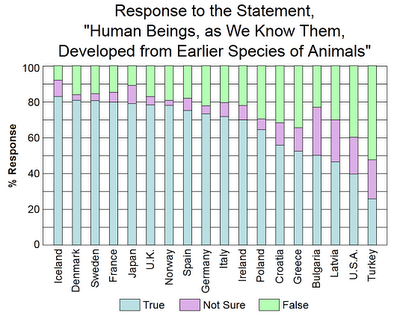 Let me tell you a few facts, some of them scary. The United States is the world's largest economy according to nominal GDP. It's the world's largest democracy, and by far, the world's largest military force. It is capable of destroying the world many times over, but it thinks of itself as the world's protector; a beacon of prosperity, democracy, and liberty. To a large extent, the US is those things. US citizens are prosperous, not because the country would sit on an abundance of natural resources, sell them to the rest of the world, and do nothing else; but because the country employs an economic system its participants can depend upon - a system that emphasizes honesty, consistency, dependability, and responsibility. As opposed to many places, the US system creates an environment where risk-taking is possible, and rewarded generously. The result has been a prosperous economy that makes even poor US people richer than middle-income people in many countries.
2 comments
Read more

May 02, 2012
If you play World of Warcraft as a healer, and you use the default Blizzard raid frames that were introduced in Cataclysm, you may have experienced a common problem where the raid frames become corrupted. This problem manifests in the following ways: whenever a person enters or leaves the raid or battleground; or when anything else happens that would cause the frames to rearrange; some or all of the frames stop functioning correctly. The names on frames no longer properly correspond to the players these frames target. A single player's name may appear on multiple frames, but only one of those frames actually targets the right person. The reason this problem occurs is because of an unfortunate and subtle interaction between Blizzard raid frames and third-party add-ons. The default raid frames expect to execute with privileges that WoW reserves only for trusted, Blizzard-provided UI code. When the frames work correctly, the buttons that correspond to individual players will adjus
Post a Comment
Read more
More posts