Showing posts from August, 2010
Show all

The doghouse: India goes after encryption

August 31, 2010
India is going after all sorts of encrypted communications that are making it inconvenient for its security services to keep tabs on everyone. They've already gone after RIM (Blackberry), and telecoms firms are next. If their smarts are sufficient to at least be consistently dumb, a countrywide ban on secure web browsing ought to follow. This is a ridiculously bad idea because it only prevents law-abiding citizens from using encryption to protect their sensitive communications. All the smart criminals and terrorists can continue to use encryption, whether or not it is legal, as they please.
Post a Comment
Read more

Something to show your kids

August 25, 2010
A very nice article making an attempt to dispel the irrational fears of food additives. An imbalanced diet is much more of a danger than the additives in the food: So, had I overdosed? Yes, but not on E numbers. Dr Heaversedge wasn't worried about my E consumption, not even sodium nitrite (remember that 100-fold safety margin). What he was horrified by was the fact I'd eaten 418% of my recommended daily allowance of fat, 500% of my salt RDA and 218% of my sugar RDA. So the biggest nutritional culprits in my binge came in purely organic form and had no E numbers. Don't miss the column that enumerates a few additives used by our ancestors in recent centuries. Strychnine and sulphuric acid in beer, anyone?
Post a Comment
Read more

Conversations with a Christian

August 16, 2010
The following is my summary of a long and frequently frustrating debate on Facebook between myself, another atheist, and a Christian. I changed the names for some degree of privacy. "The evolution of morality is a pretty well researched question with solid evolutionary answers. A better argument for the existence of something along the lines of God is awareness itself. To the best of my knowledge, science has so far been unable to offer an explanation of why anyone's aware of anything. Nor does it offer a satisfactory explanation of why I happen to be aware of only me - and not any of the other billions of creatures in existence. In my mind, questions about the origin of awareness beg an answer that must point somewhere outside of what we currently know as nature, or at the very least requires augmentation of our knowledge of nature. However, jumping briskly from these questions to "God exists as depicted in the Bible, and he sent Jesus to atone for our sins" is a
9 comments
Read more 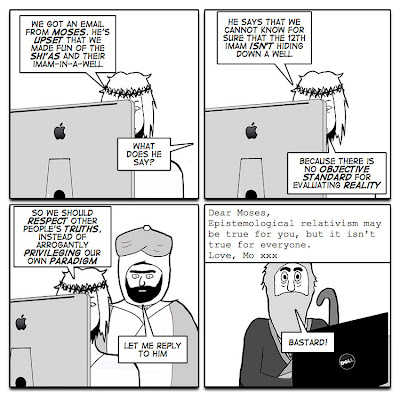 Words of an influential imam , with whom Ahmadinejad "regularly consults": "If the judgment for the [female] prisoner is execution, then rape before execution brings the interrogator a spiritual reward equivalent to making the mandated Haj pilgrimage [to Mecca], but if there is no execution decreed, then the reward would be equivalent to making a pilgrimage to [the Shi'ite holy city of] Karbala." Cultural relativism, anyone?
Post a Comment
Read more

August 12, 2010
I was just recently informed, via Tomaž Štih , of Götz Aly's book Hitler's Beneficiaries . The original German title of this book was Hitler's People's State, and it analyzes in detail Hitler's economy before, as well as during World War II. There's a Spiegel review here . Apparently, this book makes a compelling case that the entirety of the German war effort existed to finance German socialism. The Nazi party was, of course, a socialist party - its full name was the National Socialist German Workers' Party. But it turns out that apparently, the wars and the socialism weren't related just coincidentally. Hitler was a great social redistributor; the ultimate Robin Hood, in fact - in terms of taking from the rich and giving to the poor. His social state was financed first by confiscating the property of Jews in Germany. But eventually, this source of funding ran out, and the social system required funding. Hitler's choices at that point, then, were e
4 comments
Read more
More posts