Showing posts from January, 2010
Show all

January 31, 2010
Incredible. If the world is indeed overpopulated, then censors like these should be the first to go. Protecting you from yourself, and from your obviously immoral curiosity about female ejaculation.
7 comments
Read more 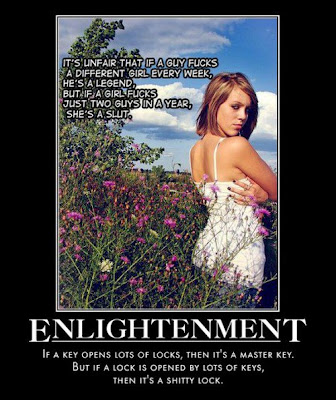 In various shapes and forms, the following has been making the rounds: This has a ring of truth to it, which is why people think it's funny. But it's false - unless the woman in question is failing to protect her fertility by getting tested and using condoms, or is failing to use birth control. I think that the label "slut" for women who like sex is spread primarily by women who have a lower sex drive to begin with, and use sex as a means of manipulating their partners. If such women did not shun and discredit other women who genuinely like sex, then their undesirability would become apparent and their manipulativeness would lose power.
3 comments
Read more

January 26, 2010
The Labour party has been in power in St. Kitts & Nevis for 3 consecutive terms over the past 15 years. During Labour's reign, the islands first subsidized an ailing sugar industry, then retired it, improved as a tourist destination, and have seen much development in recent years. This would have been great, if it wasn't for an ominous and enormous dark side: the foreign debt has ballooned from several million USD when Labour began their first term, to now over US $1 billion. With a population of perhaps 50,000, this works out to $20,000 US per every adult or child - exceeding the islands' annual GDP. Talk of corruption is endemic, and the amounts that have reportedly been spent on public projects, such as houses for laid off sugar workers, seem to be more than these projects should cost. Since St. Kitts has no external supervision and no Freedom of Information Act, it is hard to estimate how much of the more than $1 billion has been siphoned off to private accounts,
Post a Comment
Read more

Obama is the man

January 22, 2010
It's been a year and I have to say that, so far, I am fairly pleased with the Obama presidency. It is certainly much better than the dumb white guy that was in charge before. I am particularly happy to hear about his plans for some serious bank reform that ought to prevent banks from getting too big to fail. This is good news, and is something I've been advocating since a year ago.
2 comments
Read more

January 21, 2010
In the UK, two brothers, aged 10 and 11 at the time, beat two other boys almost to death , apparently unprovoked: During police interview, the court heard the older brother said he attacked the boys because he had been bored and "there were nowt to do". [...] A BBC investigation has already revealed the two attackers were well-known troublemakers and that social services were heavily involved in their lives. Compassion is a genetic trait. Some people have more of it, some have less of it, and some people don't have it. We aren't all the same. Most people who lack traits that we take for granted don't make themselves visible like this . They live among us and have relatively normal lives, except for little or no compassion, and they show this in small ways rather than large. I say this because some people have a fiction that there is such a thing as a "brotherhood of humankind", united in values that "virtually all" respect (or should res
Post a Comment
Read more

January 09, 2010
There has recently been a lot of ruckus about a "study" having "proved" that there is "no such thing" as a G-spot. The "study" basically involved asking a bunch of women who were twins whether they have a G-spot or not. Since women in genetically identical pairs would differ on whether they have a G-spot, the study concluded that there must not be any such thing. The study seems to have pretty much completely ignored relevant information such as the variety and sexual competence of these women's sexual partners. I shudder to think that this sort of complete bullshit passes any sort of review and gets published worldwide as if it's meaningful. If you want to know the truth about sexual topics, you need to go to people who have had a lot of sex and a variety of sexual partners. You need to go to people who enjoy swinging, partner swapping, group sex, open relationships. If you enter a community like that, you will quickly learn that
Post a Comment
Read more

January 08, 2010
PEBKAC. Acronym for: Problem Exists Between Keyboard and Chair. I have cofounded, and I run, a small software company that specializes in SSH client and server software for Windows. SSH is a standardized protocol which specifies how a desktop program, called an SSH client, can connect to a back-end program running on another machine. The other program is called an SSH server, and the SSH standard specifies how the two programs can transmit files and information in a securely authenticated and encrypted manner. If you have any experience with computers, I hope it's not too far fetched to expect that you have a vague understanding of what "client" and "server" means. A program that runs in a client role is proactive: it decides what server to connect to and what actions to request that server to perform. A program that runs in a server role is reactive: it waits expectantly to receive connections from clients, and responds to them as they arrive, in turn. So,
Post a Comment
Read more

January 04, 2010
Edit 2009-01-27: We learned Kenzo's pathology results today. It turns out Kenzo he had a tiny tumor that obstructed his bile. This resulted in the damage to the pancreas and liver that eventually led to his death. We are told that the tumor was very small and hard to identify even during the autopsy. It wasn't until they put the tissue into formalin that they were able to see it. Identifying it in the first place would have probably required a CT or an MRI, and removing it would have required a very involved procedure that would have been very high risk even in an otherwise still healthy cat. There is apparently no way he could have been saved on St. Kitts, and his chances would still have been poor even with state of the art skills and equipment. When our cat Kenzo fell ill, and we were browsing the web for information and other people's experiences, we mostly found reports by people whose cats survived. It may however also be useful to hear failed accounts, so as to kn
Post a Comment
Read more 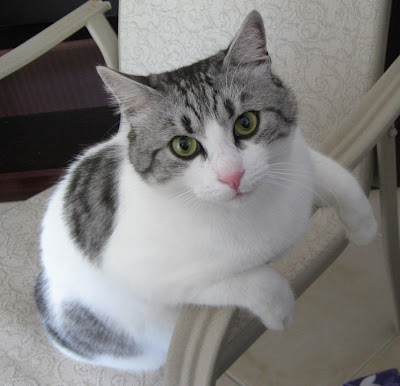 Our cat, Kenzo, died today after 3 weeks of intensive home care. He was the sweetest, most graceful and majestic cat we've ever known. Goodbye, Kenzo.
3 comments
Read more
More posts