January 11, 2008
The New York Times made some coverage of the FairTax proposal recently. The coverage was done in a way typical of mass media trying to be "unbiased": they vaguely describe the topic being covered, and quote some people who are in favor, quote some people who are against. The arguments in favor or against are not really explained, and it is left up to the reader to perform their own research, or walk away from the issue with lingering doubts.

People who are against FairTax generally quote some other economist who calls it "unworkable" or "a swindle" without bothering to explain why.

However, there is an easy way to comprehend why the FairTax makes sense. All it takes is a picture.

Taxation in the US

The following diagram illustrates taxation in the American economy. 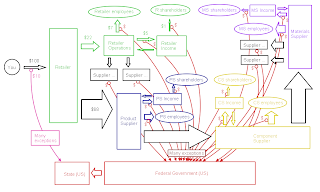 When you buy a $100 product, you observe being directly taxed only by the state, assuming there's a local sales tax. What you don't observe, however, is that the remaining $90 you are paying for the product has a lot of other tax built in.

How much tax in total?

Over the past 15 years, total US government receipts - federal, state and local - have summed up to about 33% of GDP (OECD, 'Tax&Non-TaxReceipts').

Current federal budget deficits are about $480 billion, about 3.8% of GDP. This means that the federal government spends about 20% of GDP, but collects only about 16.2% in taxes. A majority of the remaining 3.8% is borrowed from the private sector, while a minority is taken from the economy as an invisible tax, by the government simply printing the money.

Due to special interests and their lobbying, there are numerous exceptions, and the effective tax level is different for every individual product and service.

The fact that they collect this money at so many different points, and using such a complex tax code with so many special cases and exceptions, imposes a large compliance burden nationwide. The Tax Foundation estimated that this burden was $265 billion in 2005 - about 2% of GDP. This likely means that the US would experience an immediate one-time GDP growth spurt of 2% if income taxation was eliminated, just from not having to comply with the income tax alone.

There would almost certainly be another, permanent 2% or so increase in annual growth because the government would stop taxing investment to spend it on consumption.

Taxation in the EU

If you think the US has it bad, look at the following diagram for Europe. 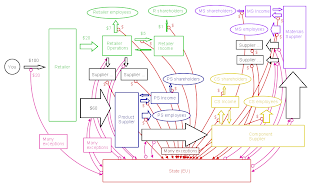 So you thought the US rescued Europe from fascism in WWII, eh?

To understand, take a minute to meditate on this quote from The Big Book of Fascism by our friend Benito Mussolini:

Anti-individualistic, the fascist conception of life stresses the importance of the State and accepts the individual only insofar as his interests coincide with those of the State, which stands for the conscience and the universal will of man as a historic entity.... The fascist conception of the State is all-embracing; outside of it no human or spiritual values can exist, much less have value.... Fascism is therefore opposed to that form of democracy which equates a nation to the majority, lowering it to the level of the largest number.... We are free to believe that this is the century of authority, a century tending to the 'right', a Fascist century. If the nineteenth century was the century of the individual (liberalism implies individualism) we are free to believe that this is the 'collective' century, and therefore the century of the State.

And so it is across Europe today. Just compare this sentiment to the diagram you see above. The State is everywhere.

In addition to the personal and corporate income tax, payroll tax, and social security taxes which are present in the United States, most EU countries impose the Value Added Tax, which performs essentially the service of a sales tax. The difference, as you can see from the diagram above, is that the VAT is much more convoluted, raising compliance costs across the EU and opening opportunities for scamsters to abuse the system, forcing the EU to lash back at them by raiding and closing otherwise perfectly good offshore banks.

Additionally, EU personal and corporate tax levels are higher than in the United States, bringing total government receipts of Euro area countries to a whopping 45% of GDP. Mussolini would be pleased.

Finally, here is the diagram for the FairTax proposal. 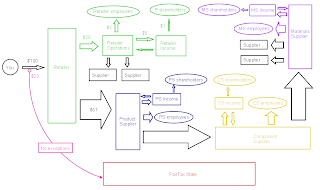 Simple, eh? Instead of collecting taxes bit by bit, at every conceivable point where there is any kind of financial transaction, the FairTax government would focus its collection in a single place: where the consumer purchases a product or a service.

The FairTax rate of 23% is calculated to replace only federal taxes. Various US states have different approaches to taxation, and it is up to them to keep their existing systems or change to an additional sales tax on top of the FairTax.

However, if you recall that US federal taxes collect about 16.2% of gross domestic product (the remaining 3.8% is borrowed or printed), it should be apparent how a 23% FairTax rate is enough.

For a more involved FairTax rate calculation, check out Taxing Sales Under the FairTax: What Rate Works? on the FairTax website. And see also the FairTax FAQ.

Anonymous said…
Based on standard measures of tax burden, the FairTax is more progressive than the individual income tax, payroll tax, and the corporate income tax. [THBPN]

Keep in mind that, theoretically, no U.S. citizen pays an actual 23% rate, since they receive the recompensatory prebate. Thus, poverty level rate is 0%. Spending at:

You’d have to be spending at 8 X the poverty to get to a rate of 20%. Even spending at 24 X the poverty level, your effective rate is still only 22%. However, this is equivalent to a "luxury tax" rate of +10.5% on ANY item after that level of consumption is reached! No "averaging," or complex rules to follow.

Anonymous said…
A consumption tax could garner more support if services/labor were taxed at a lower rate than new products. More US dollars would remain in domestic circulation putting Americans to work in service and repair, and less would be sent overseas to purchase cheap consumer goods. Such a plan would appeal to the labor unions, the environmentalists and the economists.
12 January, 2008 11:59

denis bider said…
That would be entering the slippery slope of exceptions. One of the major appeals of the FairTax is exactly its simplicity and lack of exceptions.

I also think the emphasis you're putting on "US dollars", "domestic circulation" and "putting Americans to work" hints at populism more than at sensible economics. Isolationism may be popular, but is economically stupid.
12 January, 2008 12:05